The Evolution of Print 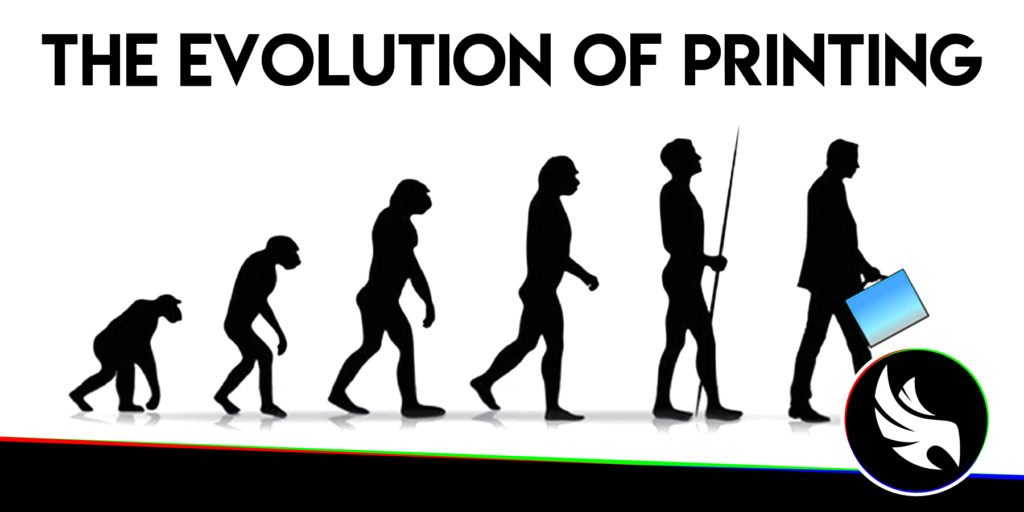 The ability to print is one of the most underrated and useful tools of the current day. While printing now is very simple with the invention of printers, it was not always this way. Different forms of printing have actually been around for a long time, and it has evolved greatly since its conception.

Dating all the way back to 3000 BC and before, there were simple forms of printing. In ancient Mesopotamia, they used cylinder seals that they would then roll across a clay tablet to imprint images onto them. In early Egypt and China, stamps would be used to print on cloth.

The invention of paper

Prior to the invention of paper, papyrus and parchment were used for writing but were kind of difficult to write on. The invention of paper did not come around until 100 BC, and the first paper-making company appeared around 105 AD. Papermaking did not appear in Europe until the twelfth century.

In the thirteenth century, type characters began to be cast from metal in Japan, China, and Korea.

In the early fifteenth century, the common method of printing was called woodcut. The way this worked was that artists would carve words and images into a block of wood. Then, the parts of the block that were not to be printed were removed while the printing parts were kept level with the surface of the wood block. Ink is then poured onto the block and the block is pressed against whatever surface the printer wanted that design on.

While different events occurred involving printing between the sixteenth and eighteenth century, there were not any massive evolutions in the field. In 1710 however, the first engraving involving multiple colors was created. A man named Jakob Christof Le Blon was the inventor of this and he did so by engraving three metal plates and putting red on one, blue on another, and yellow on the last. He eventually made a plate that had black lines on it also. As you can tell, this technique created the foundation for modern printing. Newspapers started to make many appearances in the early to mid-eighteenth century, one of the most popular being the Pennsylvania Gazette by Benjamin Franklin

In 1800, Charles Stanhope created the first printing press that utilized a metal frame rather than a wooden one. The Stanhope Press was better in every way imaginable. It could print faster, larger sheets, and was more durable. Later in the nineteenth century, specifically 1837, a man named Godefroy Engelmann was acquired a patent for chromolithography. This was a method of printing involving color. While it was mainly used to reproduce paintings, it was used for other things such as recreating ads.

The nineteenth century saw many large leaps for printing. On top of color printing becoming more mainstream, the process of printing became much more efficient. In 1847, Richard March Hoe invented the rotary printing press which had the type on a revolving cylinder rather than a flat bed. This allowed for unprecedented speeds in regard to printing. Another large leap was the invention of the Linotype in 1886, which involved the use of an actual keyboard to print.

The 1900s also saw many advancements in printing technology. From Hallmark producing its first Christmas card to the creation of electronic printer, the 1900s were glorious for printing. By 1975, laser printing was released and in that same year desktop publishing skyrockets with the use of an Apple Macintosh. These laser printers were very expensive and only used commercially at this point. Digital printing was finally introduced in 1993 and by 2020, printing has become one of the most useful tools in the modern day.

Get the latest updates and insights on using print materials to market your business. You’ll receive the latest deals as well on our products!

We can help. Use the form or call the number below to see how we can assist with your print, design, and media needs.

For more information please contact us by phone or mail