Graphic Design: Then vs. Now 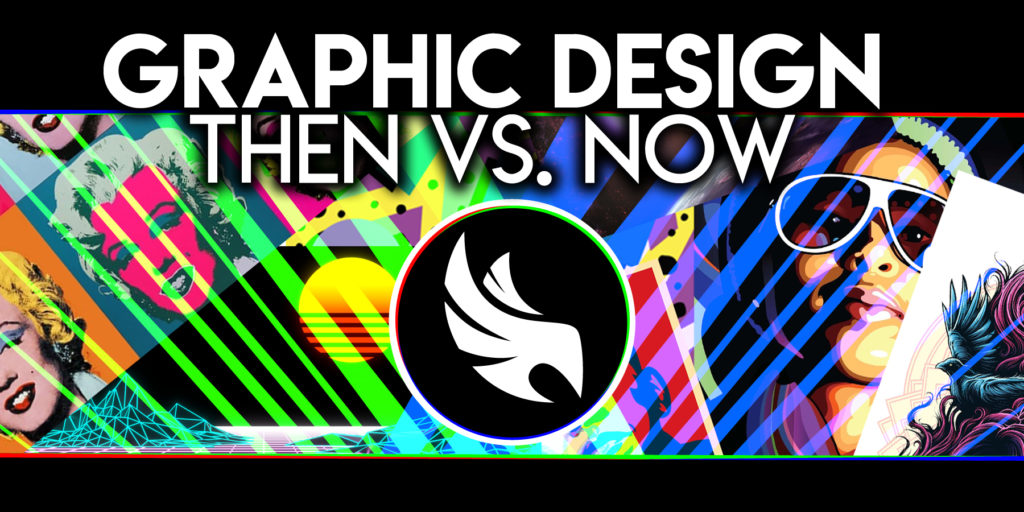 Graphic design dates back many more centuries than you might think.  It didn’t originate with the computer or even with the pen and paper, but instead with caves.  Yep, you heard me right, caves.  To give a full idea of how graphic design has evolved over the years, let’s go back really (really) far into the past.

Sure, they weren’t advertising their businesses on the cave walls during these times because, well, they didn’t have businesses.  They were, however, telling stories, and stories and writings began in the form of pictures.  Before there was language, there were pictures, and they were being carved in cave walls all over the world.  This was the very beginning of people communicating with visuals, and it never stopped.

The Sumerians created much of what we now know as written language, the earliest of which were logographic, using icons that represented the entire words instead of phonetic sounds like most languages today use.  Graphic designers today still use these concepts with icons like hamburger menus or icons that represent words when space is limited.

Graphic design and print writing advanced greatly as the advancements in Chinese printing were made.  Over 400 years before the Gutenberg was invented in Europe, China created the first movable type printing press out of porcelain, which would lead the way for inventions of the sort all over the world that would allow for print marketing and advertisement and a great avenue for graphic design.

The world’s first concept of a logo was the coat of arms.  A coat of arms was designed as a picture that was meant to represent the house’s values and characteristics, and they were later designed to be more practical and functional to act as wax seals to show authenticity.

“In the 14th century, beer and ale were viable if not preferable alternatives for drinking water at a time when most water sources were polluted. King Richard II of England made a law that ale houses must have signs out front so the public could find them easier” (99designs).  These were the first forms of signage that represented companies instead of houses, and this tradition carried through to businesses today.

Invented by Johannes Gutenberg in 1439, the Gutenberg Press brought movable type to Europe and changed the world for news and graphic design.  This invention made printing much more affordable (not just for scholarly books anymore), so design was able to be used more commercially after this point in history.

The printing industry was the first industry that first used logos as marks on their own documents.  It was mostly used to show off printing skills because if a company’s logo looked good, the rest of their material probably did too.

The coranto was before the newspaper and included the first ever printed advertisements where images were used in mass-produced ads.

This was a huge one for graphic design.  Before this point, businesses had very limited options available to them in terms of graphic design and branding, but as color was brought to print, they could finally use a lot of the modern branding tools available to them today: color schemes, slice-of-life scenes, some realism, fashion, and artistic usage of colors.  Plus, they could get even more creative with their logos.

Up until this point, graphic design was really just included in knowing how to advertise.  It wasn’t until 1903 that a company dedicated to JUST graphic design was created.  This company was full of visual artists, painters, architects, and graphic designers, and they were known for their stylistic innovation.  They set the stage for the popular Bauhaus and Art Deco styles that soon followed in World War I.

William Addison Dwiggins, in an article called “New Kind of Printing Calls for New Design,” first used the term graphic designer to describe his own role in creating the visuals for his books, and with that, graphic designers finally had a name.

1947 – Thoughts on Design is Published

Paul Rand’s published work, Thoughts on Design, included Rand’s design philosophies in the late twentieth century, where he called for “functional-aesthetic perfection.”  He emphasized the perfect balance between making sure the logo looked good aesthetically and also communicated its purpose effectively.

As computers became more widespread in businesses and in people’s homes, mass communication changed in a big way, and marketing, art, and business changed with it.

Adobe Photoshop’s release was an unprecedented change for the world of graphic design.  Photo manipulation as a whole created a whole new subcategory of graphic design where photography, illustration, and CGI could all work together to create the ideal level of design and branding.

As technology is constantly changing and businesses, marketing, and art are adapting along the way, the history of graphic design is ever-growing, with more and more additions being made to it regularly.  As businesses look for new ways to stand out, graphic designers get more creative and revolutionize the industry.

Get the latest updates and insights on using print materials to market your business. You’ll receive the latest deals as well on our products!

We can help. Use the form or call the number below to see how we can assist with your print, design, and media needs.

For more information please contact us by phone or mail